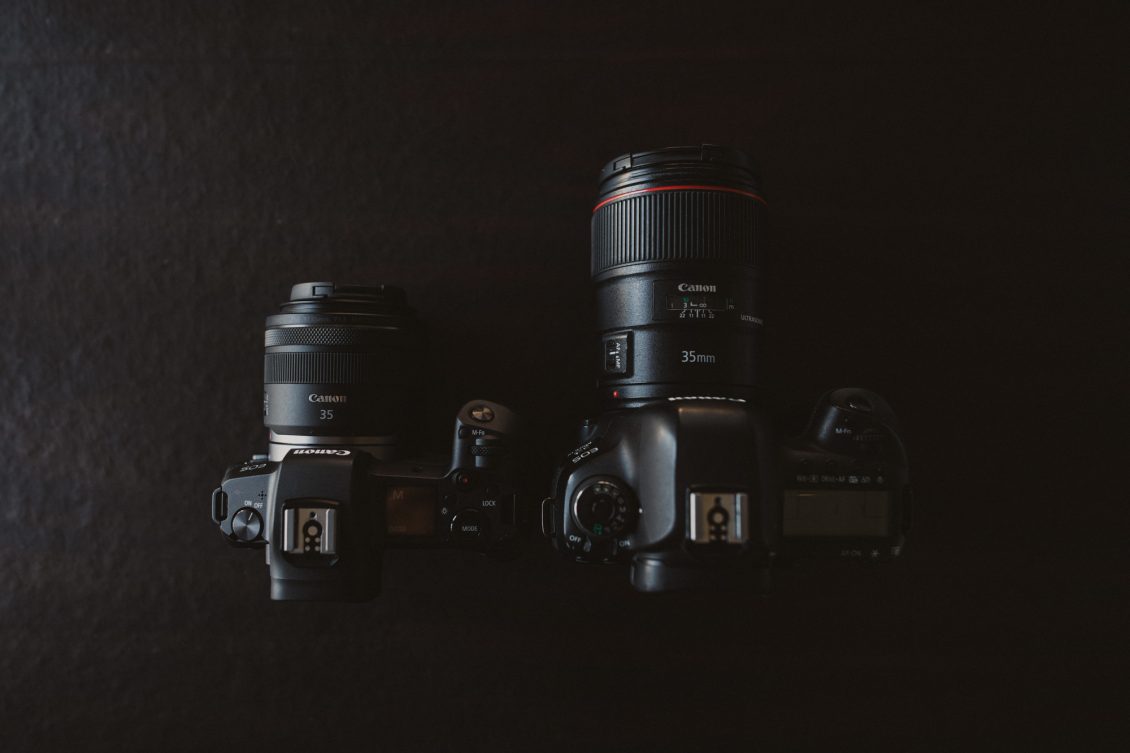 Here’s the deal. There are plenty of reviews about the Canon EOS R vs the Canon 5D Mark IV. They’ll break down tech specs and give you a high-level view. I don’t want to add to that noise. Let’s instead figure out if this camera might work for wedding photographers.

To sum it up in non-tech terms, the EOS R is essentially the Canon 5D Mark IV (sensor, processor, etc) crammed into a body that’s half the mass. The Goldilocks of cameras. I got one this week mainly to use for personal projects, photos of everyday life, and traveling. I used it pretty much nonstop for a few days and even decided to take it along for a family shoot. It got me wondering if maybe this could work for weddings too. Perhaps even replace my Mark IVs altogether.

This is probably the first thing you noticed about the EOS R. It was for me at least. After a super long wedding, my shoulders are killing me from hefting around two 5D4s and their respective lenses. I always thought the form factor of mirrorless cams were so much better suited for weddings for that reason alone.

The EOS R is about half the mass of the Mark IV but the overall durability seems pretty similar. I’m rough on gear. On any given wedding day, my cameras are constantly banging against door jambs, getting rained on, getting set down on the ground, being sprayed by salty ocean mist – all sorts of harmful things. The metal body and weather sealing of all the 5D4 has been passed along to the EOS R, so in terms of ruggedness, I don’t expect this little guy to be any less durable.

This one of the more important qualities for me when considering this camera for wedding use. Like many of you, I’ve bought into the Canon ecosystem. I have Canon lenses, a bunch of Canon LP-E6 batteries/chargers, Canon flashes, and I’ve fully unpacked all the menus and features of the 5D4. It would be super great if very few things needed to be purchased or re-learned to adapt this to weddings.

The EOS R uses a different (better) lens mount than the 5D4. Canon makes an adapter to accept all your existing EOS lenses for $100. As of this writing, most places selling the EOS R include it for free.

The new R mount is long overdue. It has more pins, which enable more functionality from the lenses designed for it. For example, there’s a new ring on the lens near the focusing ring that can be assigned to do a bunch of cool things. I have mine set to adjust the ISO, but I think the stock setting is to adjust aperture. Pretty rad. Canon makes two more adapters for your EOS non-R lenses and one of them allows you to add this ring function to those older lenses.

The EOS R uses the same LP-E6 batteries as the 5D4 too. So you don’t have to invest in new chargers or a bunch of new batteries if you decide to switch. And if you’re just wanting to add an EOS R into the mix and keep your 5D4s, they can swap batteries interchangeably. Also a win.

Lastly, regarding compatibility, the EOS R takes Canon flashes just like the 5D4 and has the same menu system too. No new learning curve needed for different flashes or re-learning how to navigate the camera’s menu. 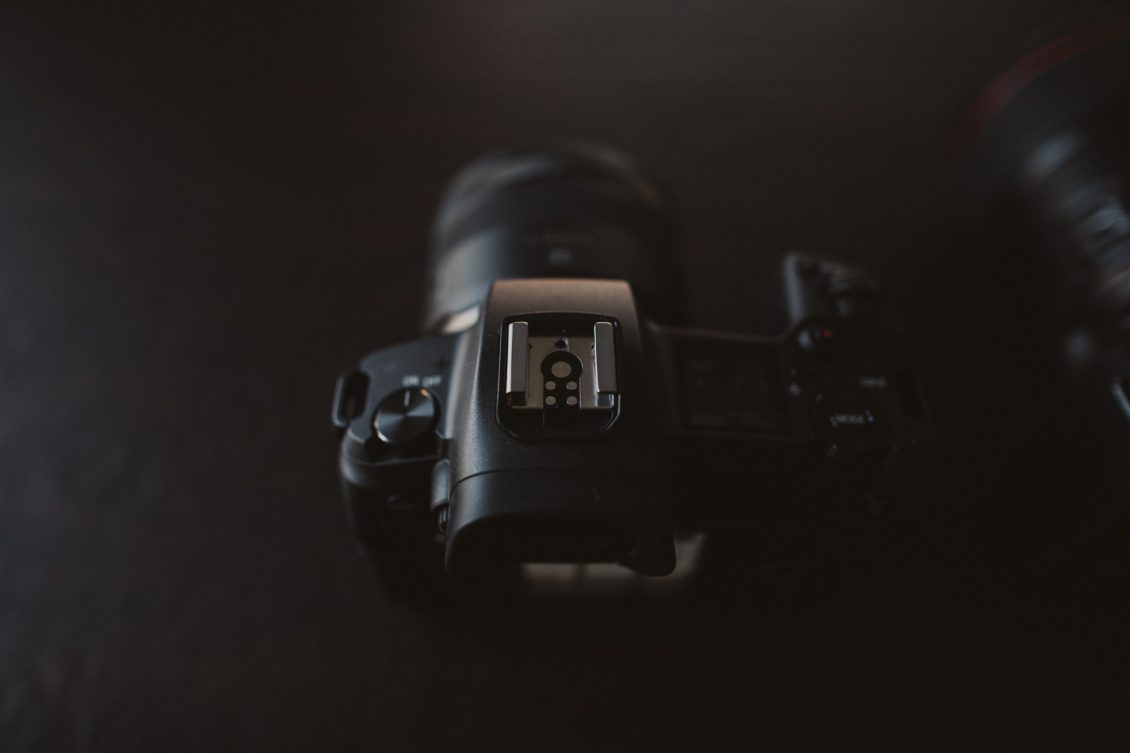 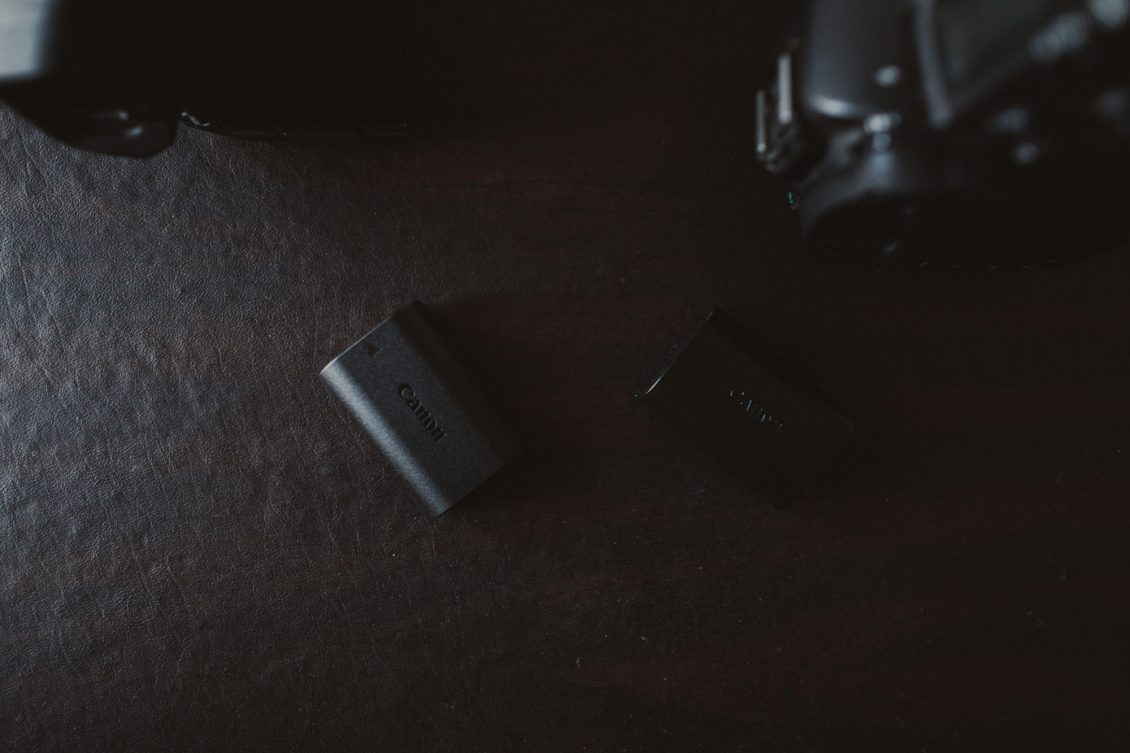 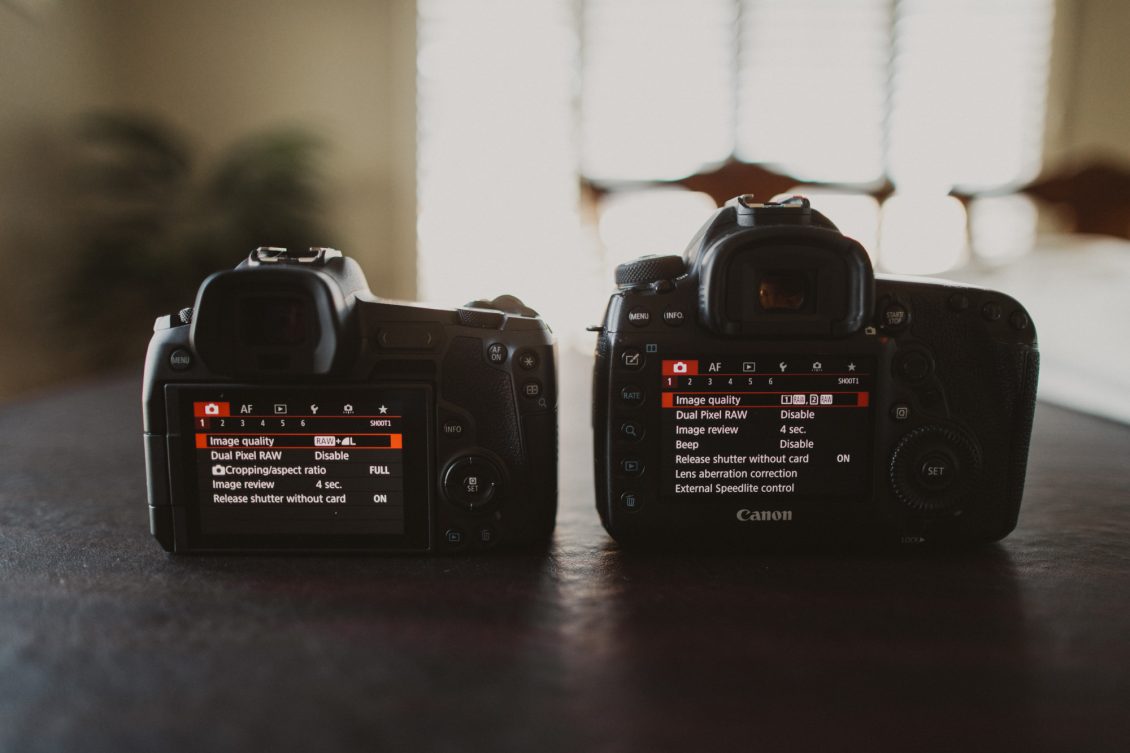 Remember, this camera is a 5D4 made much smaller because #mirrorless; but it also has a bunch of features that make it more 2019 and less 2016. For example, it has USB-C rather than the micro-USB port the 5D4 has onboard. Not only does that allow you to transfer photos super quickly, if you, say… forget your SD card reader… but it also lets you CHARGE your camera using your MacBook’s charger. If you travel like me and want to pack as few things as possible, you can officially leave the battery charger at home. 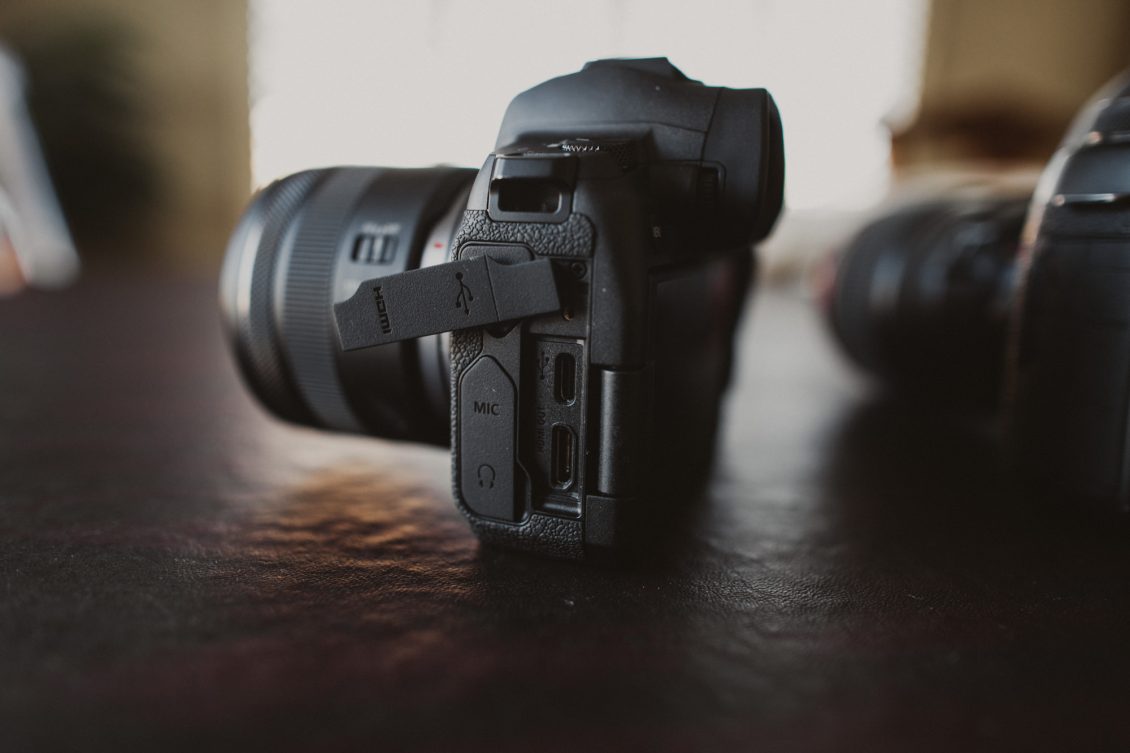 Another feature I found super useful during that family shoot was the electronic viewfinder. Not only does it look pretty because of the OLED screen, but it’s actually an enhancement over the viewfinder in any DSLR. It’s electronic and shows you what the photo will look like before it’s even taken. Something DSLR viewfinders can’t do. If you use the screen on the back of the EOS R, it will automatically toggle off when you bring the viewfinder to your eye. 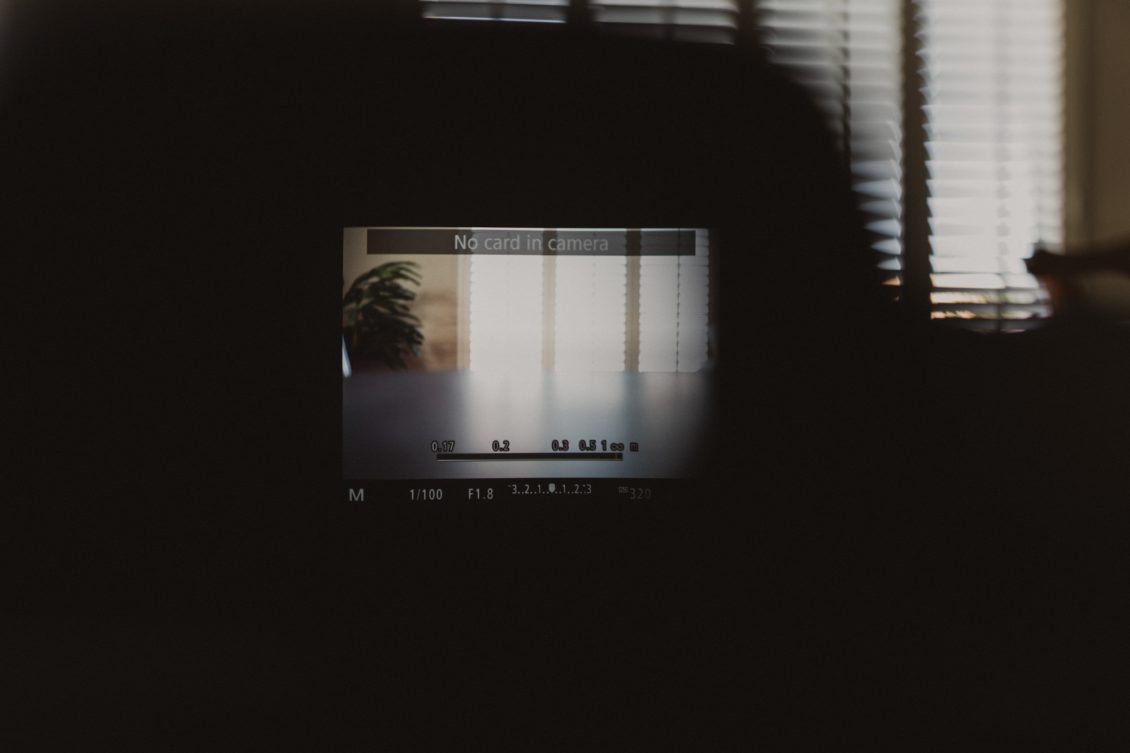 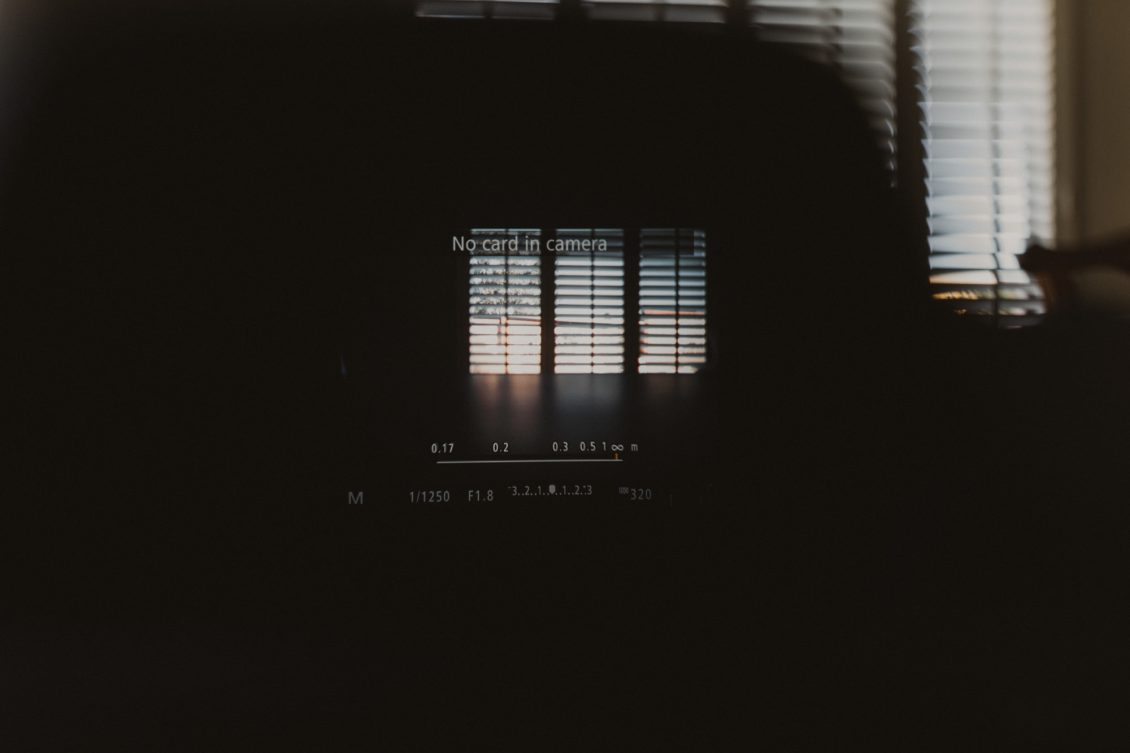 One of fav features on the 5D4 when it came out was it’s ability to connect to my iPhone and transfer photos. I like to edit and post a photo from the wedding day during dinner and hashtag it with the couple’s hashtag. It’s a pretty great way of connecting with guests at the wedding while it’s actually happening. Being able to go straight from the camera to Lightroom on the iPhone, and then onward to Instagram was such a huge improvement. However… connecting to the 5D4 involves connecting to it via WiFi, which was clunky and didn’t always work too well. With the EOS R, connectivity to your phone comes in the form of either WiFi or Bluetooth. With Bluetooth, I’ve found literally no issue with connecting almost instantly. It works just like it should. Finally.

And lastly, the autofocus. A lot of you had questions about this on Instagram, wondering how it compared to the 5D4 AF. That family shoot I used the EOS R for a couple days ago was a great way of giving the AF a test: there was a dog and a two-year-old. Overall, I didn’t notice the autofocus at all. It wasn’t much faster than the 5D4 nor any more or less accurate. I’ve never had a problem with the 5D4’s AF. If anything, the speed and accuracy of autofocus tends to be a lens issue for me rather than a camera body issue. The EOS R was at least as good if not a marginally better than the 5D4. Quick caveat though: I only use a center point for AF. I lock focus with a separate button that isn’t the shutter button, and then recompose and shoot. So I’ve never cared how many AF points a camera has because all I use is the one in the middle. ¯\_(ツ)_/¯

How Editing is Different

Many of you asked about how different the files are to edit, and if I could post side-by-side photos shot with the 5D4 and the EOS R. To you who asked, I gotchu. Here are a handful of photos shot with the same Canon EOS 35mm f/1.4L Mark II (using the adapter for the EOS R) and edited with the same preset. Overall, there wasn’t any difference editing the EOS R photos from the 5D4. They could’ve been from the same camera and I wouldn’t know any different. 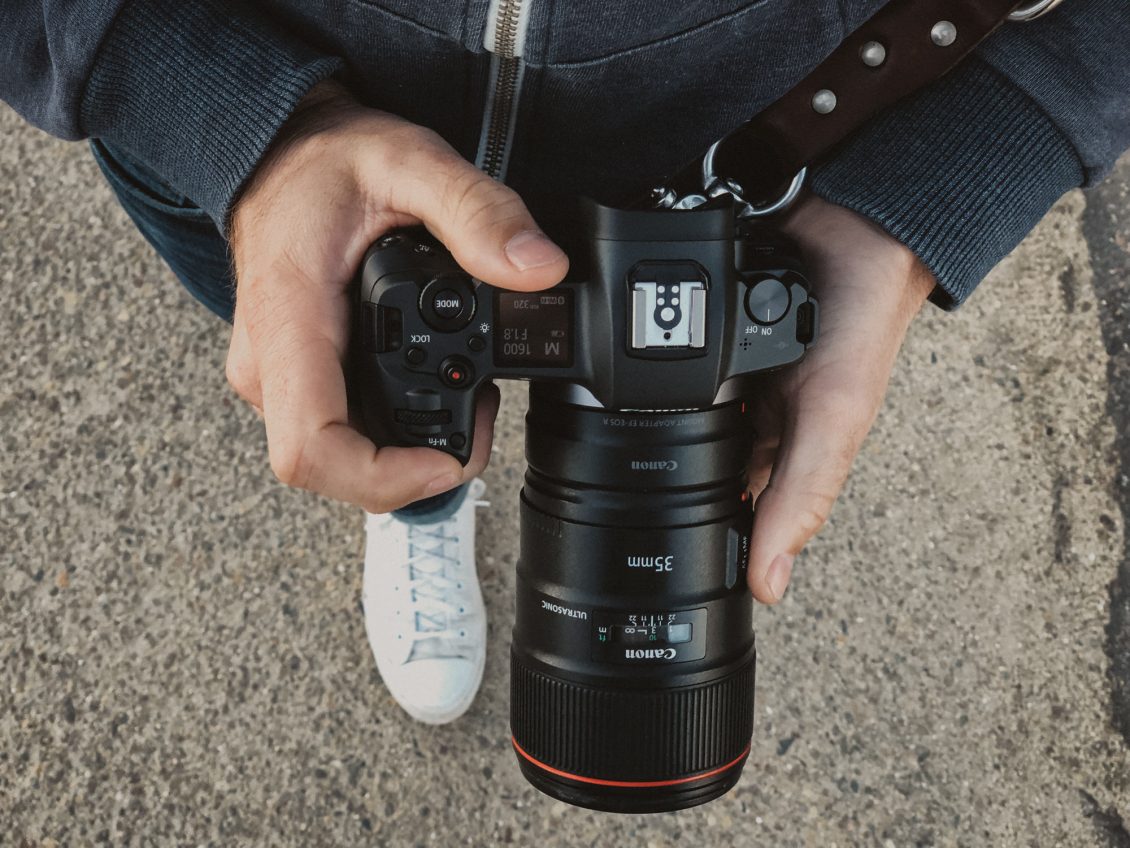 The EOS R has only one card slot and it’s for SD cards only. This is the primary reason why I, and so many others, question the EOS R’s usefulness as a wedding photography camera. The 5D4 has both a CF card AND an SD card slot, allowing you to write photos to two places while you’re shooting. This is a life saver if one of the cards takes a dive.

I use SD cards as the main depository for photos. They’re cheaper, smaller and overall more rugged than CF cards. The Sandisk cards I use are waterproof, dust-proof and don’t use ports with tiny little bendable pins. In the battle between CF and SD cards, I’m Team SD over here.

The reliability of SD cards has never been higher. As long as you’re buying name brand cards like SanDisk, they should be almost risk-free in terms of reliability. Thus negating… in theory… the need for a CF card backup. Videographers using Sony mirrorless systems have been using one card slot for years without issue. And let’s not forget our film brethren out there. 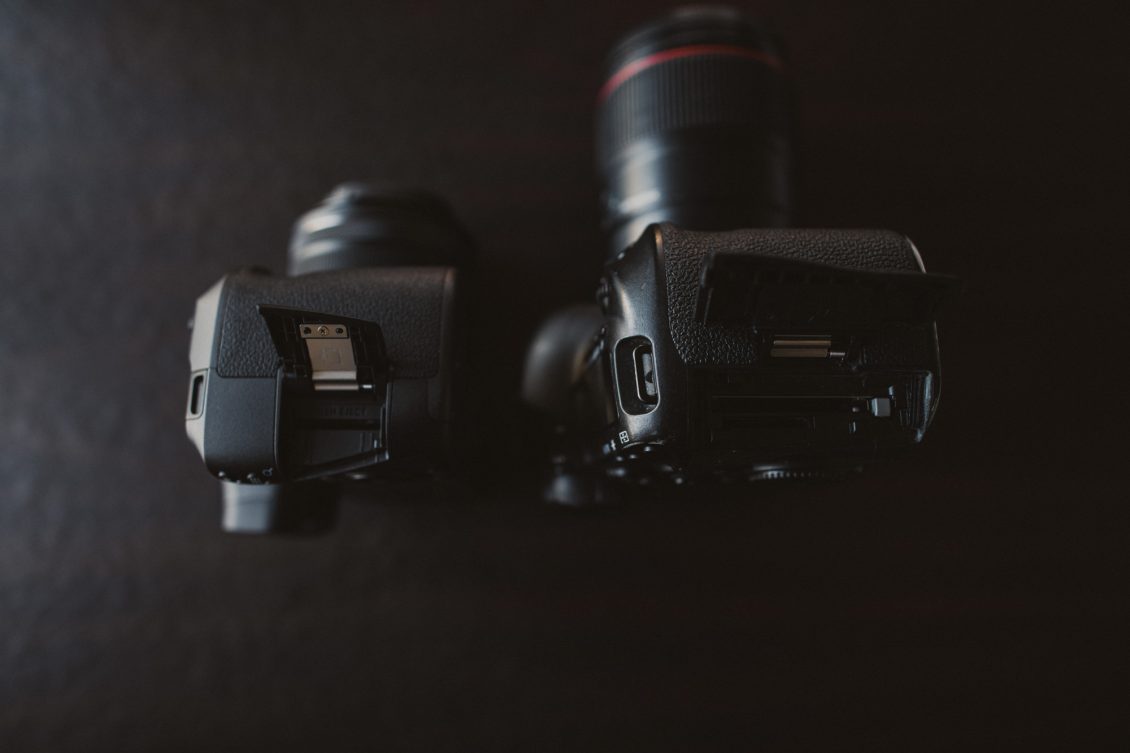 Personally, I’m going to keep my 5D4s. Not necessarily because they have two card slots, but because I already own them. I try and keep cameras for 3-4 years, so I have a little less than two years before replacing them. Who knows, in two years there may be a version of the EOS R that has the coveted dual slots. But if there isn’t, I won’t be sad. I would 100% feel comfortable ditching the CF slot in favor of all the other features. Remember, shooting with two cameras helps mitigates the risk of loss. So too does replacing heavily-used SD cards every couple of years.

If you don’t have a 5D4, were considering one, and are coming from a 6D or less, definitely consider this. This is a much more modern camera that costs less and is a net improvement to workflow. Your shoulders will thank you too.

Backpacking With A DSLR Camera